It’s not every day I have a parenting related issues that I feel the need to express (it just feels like it) but I’ve got a new one. It’s to do with people who judge you and make snide comments if they spot you using your phone around your kids. Buckle up.

The other day I was walking past some small, quite quaint shops with my three year old. As we went by, I was explaining the shops to him: that’s a picture framers, that one’s a second hand bookshop, and this one sells tablets and lotions made from plants.

It’s nothing special. It comes second nature to me, chatting away. We’re always talking, I’m always pointing things out, and he’s always curious. It’s helped him to expand his (really very excellent) vocabulary despite his slightly delayed speech. I don’t want a medal, it’s just something my parents did with me and something I do with my son.

So it was quite flattering and also a surprise for a friendly lady (probably my mum’s age) to stop me momentarily and praise me for it. “It’s so lovely” she said “to see a parent taking the time to teach their children things. You never see that these days – they’re always on their phones“. In her eagerness to get her point across, she mimicked someone talking on the phone with one hand, and texting with the other – quite the feat of multitasking by anyone’s standards.

You know where I’m going with this, right? If you ever read my quite lively post The Four Gobshites of the Coffee Shop (I hesitate to call it a rant because I am not Denise from Accounts, this is not Facebook, and you can’t mop up the after-effects of a vicious and personal diatribe with a passive aggressive “rant over” and an emoji like nothing just happened) then you won’t be surprised to learn that I feel a bit afronted by someone telling me what I should or shouldn’t be doing in the presence of my child.

I mean, I know she meant well, and I know she was complimenting me. But there was a dig in there somewhere too. Maybe not at me, but at Mums in general. Yeah, sadly some parents do need reminders not to have sex in the same room as their kids, not to make their children resort to eating out of dog bowls because there’s no food in for tea, or not to give them methodone to help them sleep. But they’re the parents who need a hell of a lot more intervention than a busybody with a shopping bag telling them to put their phone down.

You only have to glance at the paparazzi photos that the Daily Mail churn out to see labels plastered on women; whether mothers are branded as “Me First Mums” (I won’t bother furnishing you with a link but let’s just say the judgement is often very much cast on non famous types) or the more positive sounding “Multi taskers” (Jools Oliver or anyone else the Mail deign to approve of) just goes to show the whim of favour that women are subjected to – all over using a fucking phone.

It pisses me off and gets under my skin, so here’s my defence of using my phone around my son,,.

What I Use My Phone For

Even the most golden of oldies know that these days phones aren’t just for ringing people, but still they shouldn’t assume that if I’m sitting in the park fiddling with my phone that I’m looking at Minions memes on the internet or any of the other millions of ways to ignore my child.

Sometimes – quite often in fact – I have to send emails instead of making important phone calls because (especially when my son was in his terrible twos) he’d either shout ‘Monster Truck’ in my face or bat the phone out of my hands so deftly that it’d put the South Korean Olympic table tennis team to shame.

Here’s just some of the things I do online (in the presence of my son – shock horror!): repeat prescriptions, emailing his Dad who cannot use a mobile phone at work, or my Mum who checks her emails on her iPad (but avoids answering the house phone because, like me, she secretly hates people), booking pre-school theatre workshops, arranging pick up times, paying for football lessons, renewing library books so we can spend longer in the park, or re-arranging delivery times so we can go out for the day instead of waiting at home.

See? It’s not all wilful ignorance. But people like to assume.

Is it the actual phone that’s the problem here, or the parent? I get the feeling that if I was leafing through the paper while my child plays happily at my feet (like so many husbands did on their return home from work in their generation – don’t even get me started on this!) then you wouldn’t have such a problem would you?

If I was knitting, or talking to another mum, or another stranger-approved wholesome activity then I wouldn’t attract any judgmental glances. But the moment you throw technology into the mix, the gloves are off.

This Isn’t a Generational Thing

Don’t make the mistake of thinking this is a new thing. Mums have been ‘ignoring’ their kids since the dawn of time. Do you think neanderthal women spent all day doing educational cave paintings? Did they fuck – they had sabre tooth tigers to skin, and fires to light, and snazzy little fur playsuits to make.

Going back nearly as far in history I recall routinely being left on a bench while my mum played badminton with her friend Bernadette or having to follow her round the jungle of lace and and sturdy straps that was the Marks and Spencer bra department. That was the 80s equivalent of using your phone around your kids and I promise you there isn’t a child alive that hasn’t been subjected to boring shopping at some point.

She even left her older kids strapped in the buggy at the poolside while she had swimming lessons – which makes even me shudder at the sheer lack of health and safety assessment but my point is parents have always had their own stuff to get on with whether it’s badminton or reading the paper or shopping for bras or talking to the neighbours or using your phone around your kids. 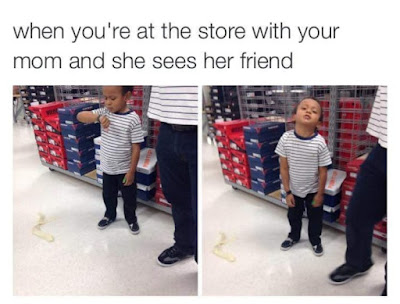 There’s not anyone who knows what I do all day (least of all me) so nobody is in any position to judge me. Well Meaning Woman talked about me “taking the time to teach [my child] things” but the thing about teaching any child anything is that you are always teaching them. You don’t really get a choice in the matter!

They are constantly learning and very often we don’t get the convenience of stopping what we’re doing to have cutesy little one-to-one life tutorials. So we multi-task and teach. Do the dishes and tell them how the dinosaurs died. Navigate a ring road and explain why lions aren’t technically ‘King of the Jungle’, or try to have a shower and explain why you’ve got hair in certain places and they haven’t. We rarely get a choice in the matter, and sometimes you can’t be arsed but you do it anyway because that’s what we do. They can still learn and grow simultaneously at the very moment you’re using your phone around your kids, that’s how incredible children are.

But sometimes… sometimes I want my own time. I want to see what’s being said in the WhatsApp group chat even if it’s just pictures of dogs in sunglasses (especially if it’s pictures of dogs in sunglasses, actually, let’s be honest), I want to go on social media, I want to order something off ASOS, or do some bloody Sudoku in peace and quiet for five minutes. And guess what – I do it at home, too! Yes I do it at home where people can’t judge me and give me disapproving looks.

Using your phone around your kids is the technological equivalent of finishing a hot cup of tea, of having a wee alone and uninterrupted, of being able to get through the day without someone else’s food or bodily fluids appearing as if by magic somewhere on your clothes.

So this one’s for the parents (especially the mums) who find themselves on the receiving end of those looks. You send your texts, you skin your sabre tooth tigers. And to the strangers and passers by, however well-meaning: there’s so much that we are made to feel guilty about these days, please don’t add using your phone around your kids to the list.