The other week, as we were walking along the Strand approaching the White Star Building (now the 30 James Street hotel – and between you and me I would’ve loved the new owners to have actually called it The White Star Hotel or even Albion House Hotel) home to the famous shipping line’s headquarters, my Dad started dropping some knowledge on me.

If you’re from Liverpool, or familiar with some of the world class architecture around the Pier Head and the ‘Three Graces’ (the Liver Building, the Cunard Building, and the Port of Liverpool Building) then you’ll no doubt recognise the stunning Grade II listed building that I’m talking about.

What you may or may not also know is that it was from the balcony of this building that the White Star Line officials read out news of the Titanic disaster to an assembled crowd below. A world away from news going viral on Twitter and across the globe in seconds. Reportedly they were afraid for their own safety and refused to go out into the street to read out the telegrams. Given that nearly 100 perished crew members alone were from Liverpool, it is likely that there were relatives demanding answers outside Albion House. I daresay the climate was the same in Southampton where the Titanic set sail from – although I’d sooner take my chances there than up against a Scouse widow with mouths to feed.

So anyway, as we’re strolling along, my Dad said “Eyar, they used to have a match strike plate here – let’s see if they’ve still got it“. So we went to have a nose, because I wasn’t altogether sure what he was talking about but I always like his little nuggets of information.

The beautiful shipping headquarters made of red brick and white Portland Stone (which earned it the nickname ‘the streaky bacon building’) was designed by the same architect as Scotland Yard in London. Many years ago, its impressive stone was becoming increasingly marked by smokers striking matches for their cigs and pipes, so White Star installed a striking plate to preserve their fancy stone work.

It was a shame to see the plate itself wasn’t still there (maybe to discourage smoking in doorways? That would be understandable) because I think it’s a nice little bit of history – and I don’t know what the deal is with this rusty effect sign – a shiny brass one fitting with the stature of the building would be more appropriate.

If you don’t know by now, by the way, you’ll soon learn: I’m a stickler for authenticity and historical accuracy!

My Dad suggested we go inside for more of a look round, as he promised me the former first class lounge and ticket office – if it hadn’t been meddled with too much – featured rivet work just like on a ship. Honestly, he doesn’t forget the slightest detail this man. Ask him to tell you my middle name or when my birthday is though and that’s a different story!


Instead the ground floor offices, which had been left empty and unloved for years had been refurbished in a bright and airy function room. Complete with rivets.

The hotel is a popular wedding venue now, but there weren’t any functions taking place when we popped our heads in so we had chance for a little wander round inside. It was a lovely peek into maritime history and my Dad was pleased to see the space being used these days after lying empty for so long although we both had our own ideas about what would improve it even more.

They’ve got a posh bar and apparently a spa which I didn’t even know about, and a rooftop terrace which maybe I’ll get round to checking out one day. I wouldn’t mind a kip in one of the Titanic themed rooms, as long as there isn’t an angry mob out on the street below. 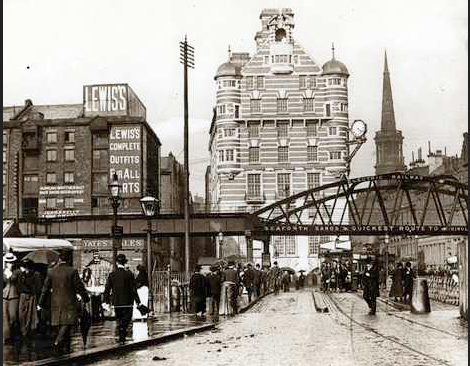 Of course, the White Star Line didn’t mean posh weddings or first class lounges to my family; my Dad’s Dad (already 13 years old and soon to go to sea himself when the Titanic sank) sailed on the SS Ceramic, the first new White Star ship to set sail after the famous disaster. He died in his early 50s, as a load falling from a ship hit him in the head, causing a blood clot. The shipping line’s doctor insisted it was heart failure, and – unlike the Titanic families – his widow and mother of 7 (my Grandmother) received no compensation. This was really quite common in those days. Remember that next time the Daily Mail try and describe something as “health and safety gone mad“.

Perhaps his Dad was on his mind.

As we left the grand reception area to make our way back round to the front door onto James Street, my Dad noticed a velvet chaise longue in the lobby. “My Dad died on one of those, just like that” he said, quite matter-of-factly “in the parlour in the old house“.

I told you; at every corner he’ll tell you a story.