Down at the bottom of the garden, amongst the birds and the bees, there lived a lot of little people, they’re called – REALLY KNACKERED MUMS.

Inspired by Scarlet Wonderland’s vision for a Bitch Cave (and not just cause I got a shout out in her very funny post about prosecco and pizza flaps – neeeed, btw!) I started to think about what I’d do with my own little garden retreat. Originally entitled the Tart Hole, I realised that – for my sins – what I really need sanctuary from is parenting.

Thus, my dream of The Mum Cave was born. Here’s what what I’d bring into my den of no responsibilities:

Not just any tea. Hot tea. A WHOLE CUP OF HOT TEA. No telltale rings inside a slightly done-in Mummy mug where it’s been microwaved once or twice in a desperate attempt to drink a bit more before wrestling small people into coats and shoes, either. A proper China teacup with proper tea. Maybe even a teapot and treat myself to a second cup. After all, nobody can run into it headfirst in the Mum Cave. 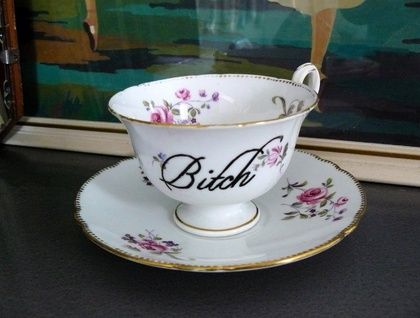 Don’t know how big your garden is but I don’t think the deeds to my house identify so much as a square foot that isn’t within my earshot of children (shame it doesn’t seem to work when mummy is shouting “time to tidy up now!” though, innit?). So for this I need earplugs. I very kindly have a relative smuggle some industrial earplugs out of a well known car factory for me but noise cancelling headphones or white noise might be even better.

I’ll let you into a secret here (and it’s not really a secret because I mentioned this not so long ago) but I don’t actually like gin. I used to use my mum’s Gordon’s to dab on really angry zits when I was a teenager but never got into actually drinking it. Even now it’s really trendy I still don’t particularly want to know. But I reckon if it really helped me ‘relax’, shall we say, then I’d introduce it to the Mum Cave and forget my responsibilities for an hour or two.

(This in itself is a joke because I cant handle my drink at all and my hangovers themselves last for three and a half days.)

Not the leftover coffee cremes from your Christmas Roses, half-chewed Celebrations or Maltesers with the chocolate sucked off; I’m talking pure unadulterated truffle action. Charbonnel et Walker, Hotel Chocolat, Godiva…. anything in a posh box, preferably heart-shaped. Most importantly: no little sticky fingers in sight.

Box sets with swearing in

If the ear plugs aren’t required then I’d love nothing more than to watch some uninterrupted adult telly. No, not that kind of adult telly. Well maybe one or two simulated shagging scenes but nothing too blue. No what I mean is just something that isn’t Sophia the First or PJ Masks.

Do you remember when you were a kid and your Dad would say “stop pausing that, you’ll burn the tube out on the telly” or “perish the tape” in the VHS? Well I’d have been in big trouble with Old Tony the amount of times I’ve had to pause something unsuitable because of swearing, nudey bits, violence, or “mild peril” when a child has wandered within earshot of something far too grown up while I’ve been ironing or trying to have some “me time”.

My sweary box set of choice for my Mum Cave without doubt would have to be the Sopranos. Wall to wall f- words and c-bombs. Heaven.

Dressing table with make up on

We’ve all done it; left an infant unsupervised with our MAC foundation or a shimmering highlighter, then learnt our lesson when that red lippy got wrecked.

Imagine an immaculate dressing table without finger prints in your creme eyeshadow, toy dinosaurs gouging chunks out of your bronzer, or superheroes using a mascara wand as a weapon.

Being able to lay your hairbrush out like a Hollywood starlet without it being full of cuddly animal fur, and keeping your perfume on display without 70ml of Chanel being squirted under a bed to ward of the Trump Monster (whether this is a flatulent figment of the imagination or a toddler’s hot take on the current U.S. administration is up for debate).

Don’t know about you, but I’m starting think I might need to make this Mum Cave dream a reality…