I had to do some unshopping this week. You know when you’ve got piles of stuff to return and it’s giving you the stress sweats because the receipt is like a ticking time bomb as you get nearer to the deadline?

I felt pretty pleased with myself for finally getting round to it within 28 days (OK it was 27, but still…). You have to celebrate the little goals, I always think. I even suggested to two year old Primo we go for a babyccino and an early lunch in Costa Coffee which was nearby.

Now this isn’t some kind of bolshy moan about Costa staff. Far from it. I’ve never had a bad word to say about any of the staff in any branch. Especially the French barista at the Birmingham New Street concession that I had an unspoken love affair with for over a year even though the only words I ever said were “medium latte please” and his were repeating the order back to me when my drink was ready and adding “have a good day”. Relocation’s a bitch.

Anyway, I digress. I love Costa. But I don’t love nosey parkers. And I’m especially not very fond of judgy nosey parkers who make you feel rubbish.

I’m talking to you, Smug Pregnant Woman, who commented loudly about “feeding kids absolute shit” and how easy it is to cook children’s meals from scratch instead of packaged food. When I looked up, you and your mum (who, btw looked like one of the people who lived down the well on Fraggle Rock so let’s hope that side of your gene pool isn’t that strong, eh?) were sneering at my son as he was happily eating a toasted bacon roll. 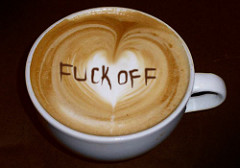 So let’s get things straight, shall we? Firstly, the kid had porridge with Medjool fucking dates in for his breakfast for Christ’s sake so I think he deserves the odd bacon butty now and again, don’t you? But you don’t know that and you don’t want to know that. You want to make your own conclusions about my parenting because you are a smug Nelly Know All.

Secondly: You are sitting in Costa Coffee with all the time in the world because your baby has yet to be born, judging the shit out of everyone else, and second guessing other parents’ capabilities. Well guess what? I’ve made an assumption about you too, pal. My assumption is you’re going to be in for a bit of a shock when you have your first child, and it’s not all Instagram and Annabel Karmel like you think it’s going to be. I’m going to be generous of spirit here and hope for your sake nobody looks at you like you looked at me when you’re out on your own with your son or daughter.

Thirdly: I see Fraggle Mum just bought you another massimo latte which has four shots of espresso in and therefore 277mg of caffeine so tell me again how I don’t look after my kid’s health, bitch.

The same goes for the older couple right next to us who made remarks about “parents glued to their phones”. Yeah yeah, I get it; I used to be like you. I used to think that we are a generation consumed by technology and that it’s a crying shame that the natural beauty and wonderment of a growing child is overlooked in favour a small screen.

Bollocks to that. For starters, I was emailing a repeat prescription request and I’m perfectly happy with my decision to do it online in two ticks while he’s swirling his fingers messily in his frothy milk than drag him to the doctors surgery which is a pretty shit outing even by my standards.

Plus, this was my coffee shop visit and my son was my guest. I let him come with me. I deserved a break, and because you are a complete stranger, you have no idea what I may or may not have been doing all day. Believe it or not the world doesn’t revolve around children, because if it did I would sleep in a treehouse wearing Finding Dory armbands and football boots and we’d eat nothing but breadsticks and chocolate buttons for the rest our lives.

Oh, and Newsflash you miserable bastards: There’s worse parenting crimes than checking your phone in front of your kids so get a grip and maybe practise what you preach by focussing on each other instead of us and what we’re doing.

Nothing funnier than witnessing someone pretending not to see you, is there? Well maybe seeing someone miss their chair when they’re sitting down – that’s always a good one.

We’ve all done it. It’s fine. I don’t take it personally. What I find a bit hypocritical though is someone who’s known my family for years, who will ask after my mum and pinch my son’s cheeks affectionately in church when all the right people are looking, but when nobody who matters is around in Costa Coffee will actively avoid eye contact or even saying hello. I wasn’t going to invite you to sit with us, I wasn’t going to ask you to pay for our food. A wave and a mouthed “hi” would have done the job.

Yes I get it, coughs probably don’t make the ‘Top Ten Most Beautiful Sounds of All Time’ charts. Not when there’s beautiful noises in the world like birdsong, uncorking a bottle of wine, or the schloop of a big spoon in a gloriously viscous trifle.

But do y’know what? It sounded a hell of a lot worse four days ago when he could hardly breathe, when he was whimpering with discomfort before his next dose of Calpol was due, when he was struggling to sleep at night. This was our first outing in nearly a week and there’s only so much Paw Patrol and den-building you can tolerate before everyone goes stir crazy. For you, it might have sounded like a disgusting germ-ridden splutter but to me it was a vast improvement on the previous few days, and the clink of coffee cups and chatter was a welcome break from Mayor Goodway and that daft fucking chicken.

Were you worried about germs or something? Because as far as I’m aware, if you’re queuing at a counter and my child is sitting down nicely at a table facing away from you and covering his mouth when he coughs like I taught him, you probably won’t drop down dead from the Black Death before the barista finishes your medio soya macchiato. Being a parent doesn’t make me some kind of dirty specimen who doesn’t give a shit about anyone else’s health; I’m conscientious and I’m clean and have spent the last three years doused in Eau de Milton and antibacterial hand sanitiser. So in future maybe save your disgusted glares for someone who actively drips snot onto your muffin, giving a whole new meaning to lemon drizzle. 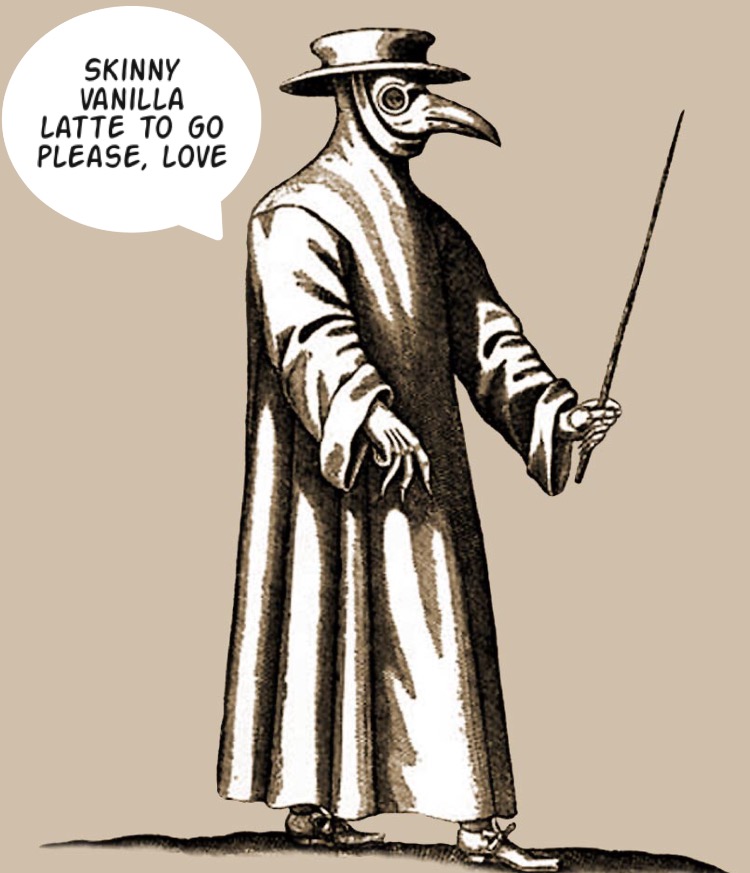