I’m writing this sitting on my bed in that post-bath Bermuda Triangle of time where one minute you’re wrapping a towel round your pink steaming self and then before you know it, three hours have passed and both you and the towel are bone dry and your body feels like it’s been pebbledashed from the imprint.

My bedspread has egg on it (yes I have a bedspread – not just because am highly voguish instagrammer but primarily because I chucked my winter duvet away about a year ago and now have to layer up my summer duvet or perish from misery and icicle tits over the next few months). The egg is from some carbonara I made for 2 year old Primo and I indulged him in the way only a mother who has a sick child can. And if that means making mini pasta dishes and eating them on my bed in the middle of the day watching musical videos of bin lorries then so be it.

Earlier this week you see, he had a little accident at nursery and it resulted in a trip to A&E and the deft hand of a plastic surgeon. He’s on the mend now but it was a horrible day for him (not being able to eat or drink as we waited for seven hours to find out if he could be fitted onto their list for the day, not to mention the unpleasantness of the anaesthetic) and heartbreaking for me to see his little arms and legs fighting against the anaesthetist who was holding the mask down on his face. It was made worse when in my desperation to see him straight after surgery, I was pacing anxiously in a corridor outside the theatre instead of in the waiting room where I was told to wait – only to find out that the nurse had entered the waiting room from another door and couldn’t find me to let me know it was over. They assured me there was only a minute or two delay but I’ll never forgive myself for not being there the very second he woke up. 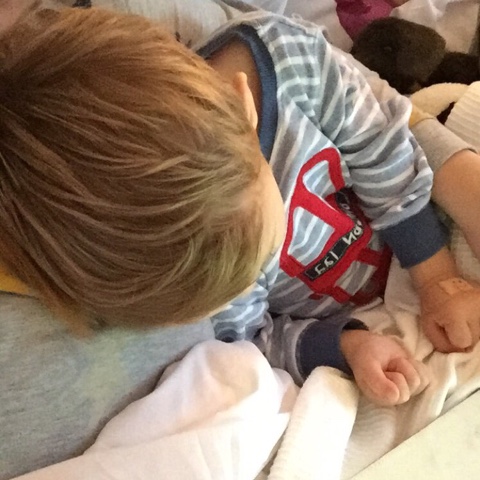 I don’t know how people can cope with seeing their babies go through major ops. How they can summon the strength to hold it together while their children go through cancer treatments. I honestly don’t. And I don’t want to find out.

So we’ve had a quiet few days at home. Copious amounts of chocolate, sometimes for breakfast. Playing in the garden in pyjamas. Lots and lots of Paw Patrol. Toys and gingerbread men and FaceTime messages from relatives and family friends. He’s even started to take the piss with his requests; the latest was “mummy sing me a song about a pick up truck who goes in a puddle” – I mean it’s pretty fucking specific mate, couldn’t you give me something more general to work with like a song about a little boy or a dog?

Anyway a couple of verses and a chorus in (yeah that’s right, turns out the pick up truck needs to go to the car wash after the puddle incident – it’s quite the ballad I’ll have you know) I realised that I’m just so grateful he’s ok and I’m grateful it wasn’t anything more serious. And I’m grateful to have someone so special and beautiful both inside and out to sing shit songs to.

Catch you next time,

Check out: This Is The Week That Was #9 featuring Mild Hypochondria, Future Learn Online Courses, and I Daniel Blake…