It’s been a good few years since I’ve done anything for Halloween that doesn’t revolve solely around kids and since I’m in the process of making an effort to do more new and exciting stuff I’ve found the perfect (slightly geeky) Halloween night out: “The Joker’s Crypt” – a Suicide Squad themed event at 23 Fleet Street (an actual Tequila and cocktail bar, not just the address of someone’s house) in Liverpool’s Ropewalks area of the city, hosted by Unlock Liverpool. 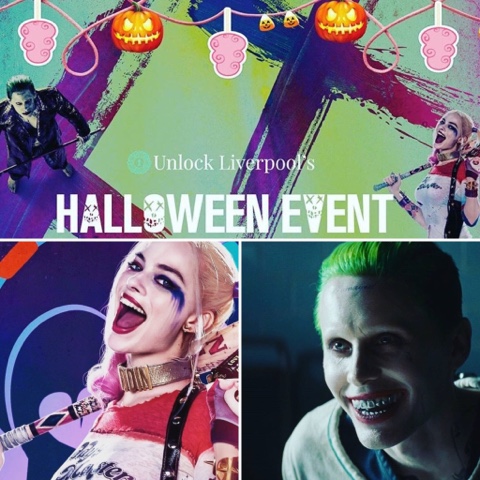 Now, I’ve never been a big dresser-upper, but I can totally see how Cosplay is such a massive (not to mention expensive!) pastime for so many people across the world, and after years of snootily declaring “Pah! Fancy dress is only ever OK for children and students” I’ve begun to realise that in fact it’s not just a bit of a laugh – it’s about letting yourself be a kid now and again which is good for the spirit and there’s no better opportunity than a Halloween night out.

If you’ve read any of my TV & Film blog posts, you’ll know that I really enjoyed Marvel’s Jessica Jones, Guardians of the Galaxy, and Deadpool – so the whole superhero theme from the recent Suicide Squad blockbuster is just my cup of tea for a Halloween night out.

I started furiously googling costumes and soon realised I couldn’t realistically pull off hotpants at my time of life (figuratively or literally) and by time of life I don’t mean age – I just mean this phase of about ten years where I’ll happily eat a whole pack of party scotch eggs in one sitting and still find room for my tea afterwards. And besides, if there’s going to be a Harley Quinn burlesque performer I wouldn’t want to be mistaken for her with my athleticism and dazzling beauty and steal her limelight. Or, y’know… burst my seams.

So far I’m weighing up my options of going as Enchantress (mucky faced baddie played by Cara Delevingne in the film – because obvs I have all the naturally devastating bone structure to emulate her and don’t at all resemble a Marks & Spencer Percy Pig biscuit in comparison) or Katara (sassy martial arts type).

It just so happens there’s a Katara costume (well, mask and jacket) on Very so I might invest in that, that way if I feel a total dick on the night I can whip the mask off and still rock a totally on trend Far Eastern inspired souvenir jacket. And, erm, some swords…which I’m sure won’t look at all out of place in the kebab shop at 4am on the way home.

The event organisers Unlock Liverpool have issued an ominous warning: “Beware – The Joker enjoys playing games with his guests, so be alert, things may not always seem as they appear” which obviously I am totally on edge about because I suffer from anxiety so of course my immediate response is to assume that there’ll be a 15ft projection of all my worst selfies in front of all the assembled party goers. I mean, I know it’s Halloween and everything but I really am hoping for something more crowd-friendly and less terrifying that the contents of my iPhone’s ‘Deleted’ folder.

So I’ve got my tickets ready, I’ve got my squad ready (sorry, “friends” – I’m just trying to sound cool), and I’ve got a sweet tooth ready for the candy floss. I’m even prepared to try tequila for the first time at 23 Fleet Street. I know right? All these years walking this earth eating and drinking anything in my path and yet I’ve never once tried tequila. I might wake up the day after Halloween and find it’s the Day of the Dead…

So if you’re in Liverpool for Halloween then come along and say hello – you can probably find me picking popcorn out of my bra with a samurai sword and complaining that Jared Leto has nicer hair than me. Perfect for anyone who loves Halloween, dressing up, a bit of burlesque, tequila, getting their geek on, and a frightfully good night out!

Where: 23 Fleet Street in Liverpool

When: 29th of October from 7pm till late

VIP: Unlock Liverpool are also going to be bumping up groups who book 5 or more tickets before October 1st to VIP