As the news hits this week that the BBC’s recipe site is set to be axed as part of a programme of slimming-down exercises in response to accusations of “imperialistic ambitions” by snivelling little weasel-faced George Osborne, I mourn the loss of the easy-to-find recipes and one of my greatest allies in motherhood – convenience.

I’m not a bad cook. I’m no Nigella, but I’m not a bad cook. I’m just not adventurous. I’ve been making more or less the same dinners all my life: lasagne, Scouse, cannelloni, cottage pie. Lots of hearty stuff. A few cakes and cheesecakes, but nothing adventurous. My friends and family will tell you it’s the best they’ve ever tasted because I’ve made them so much I’ve been able to do little signature tricks with them with much practice. For that reason I stick to a fairly small but trusted repertoire that I’ve never needed any recipes for because I was shown how to make them as a little girl with cooks and dinnerladies for grandmothers.

Sometimes though, I want to make something different. Variety is the spice of life after all. I’m not a big fan of cookery TV but occasionally I’ll see something that I fancy giving a whirl and I’m sorry (not at all sorry) but I haven’t got the money to buy every cookery book that a celebrity chef releases just to get my hands on the recipe for a special kind of chocolate cake or a crustless quiche with chorizo.

This is where the BBC recipes come in. For the occasional recipe that I might only attempt once, and – I have a giant confession to make here – poached eggs. I can never ever for the life of me remember how to make good poached eggs. I rely entirely on googling it and the first hit is BBC Food. The instructions are straightforward and work every time. They’re not trying to sell me a lifestyle or patronise me. I’m not banging the drum for the Beeb here either by the way, I’m just describing my consumer experience.

The next hit is an overly-wordy and preachy recipe from Jamie Oliver, the government’s Head Boy & Diet Monitor. He who apparently comes from working class roots (don’t they all) but seemingly cannot empathise with parents who struggle to feed their family healthy food on a budget, and thinks that all women should be able to breastfeed no probs.

Funny that isn’t it.

(Delia came in at no.3 and an article about the relative methods of poaching by The Telegraph in fourth place, in case you were wondering) 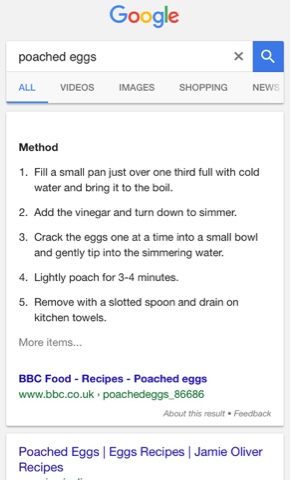 I’ll survive without BBC Food. I know enough about the basics of cookery to feed family and guests a variety of healthy and tasty food.

But what if you weren’t taught to cook at home as a child? What if you can’t afford the asparagus that Jamie Oliver suggests you pop into your children’s dippy eggs instead of bread soldiers because you know full well it will buy a bag of frozen chips from Iceland that will last a week and the kids will definitely eat? What if you can’t afford glossy cookery books and the ingredients they suggest? What if your local library has been closed? What is you’re just really fucking busy and you want a reliable convenient source to crop up when you need a basic Victoria sponge or a Hotpot without having to wade through loads of big names and their fanbase’s contributions?

Yes there’s other sources of recipes online. Plenty of them. But let’s not pretend they don’t have “imperialistic ambitions” too. Jamie Oliver is just an empire with a face. When the BBC recipes are no longer available, I think I’d rather turn to Jack Monroe, who has pledged to publish her recipes online in response to the recent news.

As with all politics, the people who play these games are seldom the end users. I bet George Osborne can’t make a decent poached egg either.