I discovered the fabulous little world of adhesive breast lift products when I was looking for an underwear solution to wear with backless and/or plungey outfits. They’re ideal for women who have big knockers which are perhaps a bit more pendulous than they used to be before having kids!

When I was younger I always wanted what I didn’t have – curly hair, glasses (why?!), and braces (wtf). It seems things haven’t changed much because despite owning every hair curling product on the market short of a retro curly perm (but even then, it’s only a matter of time until I persuade a hairdresser to get their rods out), developing the eyesight of a mole, and sporting glinting metal train tracks for three years in my youth I still want what I haven’t got: smaller boobs.

Oh how I’d love to wear vest tops without straps and wires everywhere, plunging necklines without looking like I’m about to spill out all over the shop, and most importantly – not to get that gross under-boob sweat in warm weather.

Alas, ’twas not meant to be. Instead I’m the reluctant owner of a 36F rack and the proud owner of a toddler, and that only means one thing: spaniel ears. OK, I exaggerate. They’re still pretty full and firm and my nipples still point in a roughly northerly direction. But they’re certainly a tad lower than they used to be before hormones and milk had their wicked way with them.

Enter the adhesive breast lift, a lingerie solution that works by applying a transparent (but not quite invisible) horseshoe-shaped sticker above the nipple then pulling it upwards before sealing it in place somewhere a bit further up than gravity will naturally allow.

Fortunately for you, I’m not going to share any Before & After pics, but here’s my round-up of some of the options on the market right now:

I originally got these from ASOS and was disappointed when they discontinued them because it’s a handy underwear solution to stock up on when buying new clothes online, especially with free delivery over £100 (the nack is to buy loads of stuff and send half of it back). Then I found them on the John Lewis website for around £12 and the same thing happened again. If you can source them they’re pretty good!

These were the first adhesive breast lift product I tried, and wore them with a backless playsuit which had a mesh plunge effect front and couldn’t be worn with any kind of bra. I wore them from about 7pm to 2am and then forgot to take them off before bed so had slightly tickly breasts the next day, although not irritated. It soon cleared up within about 24 hours. The product itself was easy to apply, held in place for the duration of my night out but was still easy enough to remove the next day. 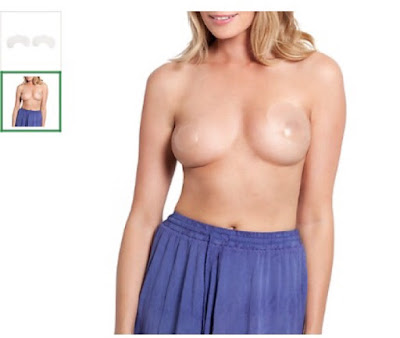 These have really good support and gave me a nice silhouette and confidence wearing them with a soft bralette. They were very adhesive – so much so in fact that they really quite difficult to take off after a wearing them from about 8pm to 5am (I know right – wild night out! Not really; I just fell asleep in them). Two weeks later I still had dry/peeling skin similar to post-sunburn skin which I sorted out with a mild exfoliate and cocoa butter but I’d bear this in mind in future.

Edit: I’ve worn them quite a few times since (for shorter periods) and haven’t had the same peeling effect as my first use of them so I’d recommend them as another good option. 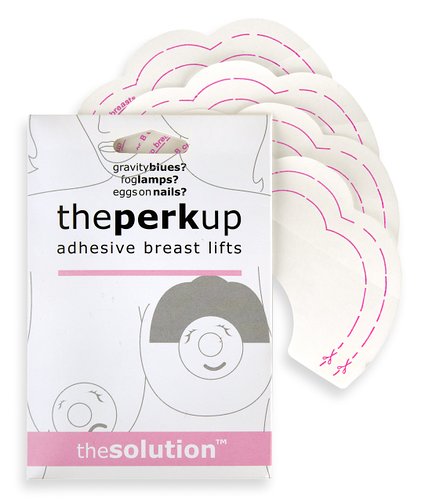 I was initially pleased with the amount of ‘stickers’ I got for my money. However… I’m not sure I can really express how rubbish these were. I’d have been better off shoving two Pot Noodle lids down my bra instead, they were so crap. They stunk of plastic, were made of thick inflexible material, and did not stick onto my skin properly. Consequently they offered no support whatsoever were just crumpled plastic stuck on my tits, leaving a terrible silhouette.

This wasn’t to do with the size or weight of my breasts, this was to do with the dire quality. I left them crumpled up with only about 30% of their surface area actually sticking to the skin, and after about four hours they had peeled off completely and made my skin warm and itchy. Absolute waste of money.