Since leaving work to ‘parent’ full time (I’m only half ok with that even being a verb these days) I’ve found myself in even more routine than the days of working a 9-5. There’s spontaneity, but more in the way of “Yeah sod it let’s just have Nutella for tea” not grab your passport and disappear to Paris for the weekend.

We do toddler related activities, see family, and I am lucky enough to get lots of free time to see friends in different parts of the country, go out to eat and dance and drink if I want to, and have some general downtime whenever I need it.

What I don’t seem to do, is do anything NEW. I see the same people, I drive the same routes, I buy (mostly) the same things every week when I’m doing the big shop. That’s ok by me, it’s familiar and it’s comfortable. We’re all creatures of habit after all. But it’s not challenging, it’s not stimulating….I’m not particularly sure it’s good for me.

So in a bid to challenge myself I set myself the task of doing some stuff on my own. I don’t just mean meeting friends sans miniature people; what I mean is doing things all by myself. And not just nipping to Sainsbury’s or the hairdressers: things outside my comfort zone.

This is going to (hopefully) be an ongoing process, but here’s how I’ve started off:

My first solo mission was to a work-related seminar; something I haven’t done for over a year since I left work. 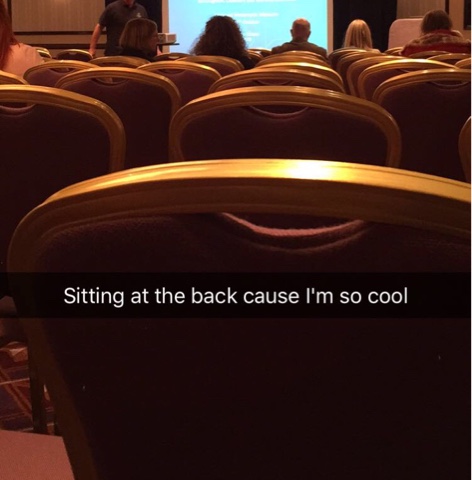 By cool I mean shitting myself

How did it go?

There was a huge crash on the motorway which had a terrible knock-on effect on the A road I was taking. The massive margin I’d given myself to arrive nice and early was being steadily eaten into as I sat in stationary traffic, visualising the horror of having to walk in late past hundreds of pairs of judgy eyes. I started setting myself get-out-clause-mini-goals like “if I don’t get past that tree in three minutes I should turn round and go home”. I knew that I’d feel a sense of failure but at least nobody else would be looking at me.

How did I feel?

As it turns out, the traffic was so bad that only 40ish of the 180 delegates booked to attend could actually make it, and it felt like the red carpet had been rolled out for anyone who managed to get there, if only through the organisers’ relief! The seminar started late, so I had time for a coffee and a searingly hot apricot Danish and to calm down, and managed to have a chat with the new chair of the local branch and introduce myself.

The talk itself was useful and I started to feel less out of touch with the industry. I knew what the speaker was on about, and was genuinely interested in the topics. I felt OK going to this kind of thing on my own. A lot of people go straight to these things from work so I didn’t feel too self-conscious.

Next stop: an evening “in conversation” with screenwriter Andrew Davies.