Or maybe this should be “Why haven’t I got any mummy friends?” because as I started to write this it occurred to me that although I’ve always assumed it’s my choice not to have mummy friends, maybe other mums are choosing not to be friends with me; that there’s something wrong with me, something other mums don’t like. It’s certainly not my toddler who’s off putting: he’s friendly and smiley, always well turned out with a clean nose, and will pick up toys that other children at playgroup have casually discarded and wobble round after them trying to return them to their rightful owners. He’s a lovely little person and nobody could dislike him. So it must be me.

And don’t get me wrong; I do have friends who have children. But I’m talking about Mummy Friends. The friends you are supposed to make almost immediately when your baby is born (or preferably before) and have playdates with, go for brisk buggy walks with, and take up 85% of the space in Costa with. When it comes to making these kind of friends, nobody wants to know me.

Maybe it’s my penchant for comfy trainers instead of those brown buckled Boden mum-boots. The fact I don’t take myself too seriously and that sometimes we pull up to playgroup with the windows down listening to rap that under-18s really shouldn’t ever ever learn the words to, instead of some kind of Montessori approved “learn your billion times tables by the age of 36 months” CD?

Sometimes I think the other mums at playgroup think I don’t speak English, as I get a cursory smile when I walk through the door and then they all go back to discussing potty training and school fees amongst themselves. I am aware that I look a bit different to them, like an unwelcome extra from the Sopranos. I am a lone leopard print boat adrift in a Joules ditsy sea. I dread to think what it must be like to turn up in a full burka – although they’d probably flock over and tell me about their amazeballs biryani recipe to get a cultural thumbs up. Diversity doesn’t include extending the hand of friendship to animal print leggings though, apparently.

Anyway I’m not lonely; I’ve got loads of friends already who I don’t make enough time for. Just not any nearby with kids exactly the same age as mine. I tell my mum this all the time but she still tries to extol the virtues of “making more mummy friends”. It’s ok for her, she’s had the same best friend since 1957 and anyone else she’s met through work or church or family has just been a bonus. I, however, don’t see why I should forge friendships with someone based purely on the fact that we gave birth on the same page of a calendar.

That isn’t to say that I wouldn’t welcome a new friend. I’d be thrilled skinny to come across someone who knew all the words to “Juicy” by Biggie and loved all-you-can-eat Chinese buffets and enjoyed Chehkov and Austen and the Real Housewives of New Jersey. But I won’t hold my breath. 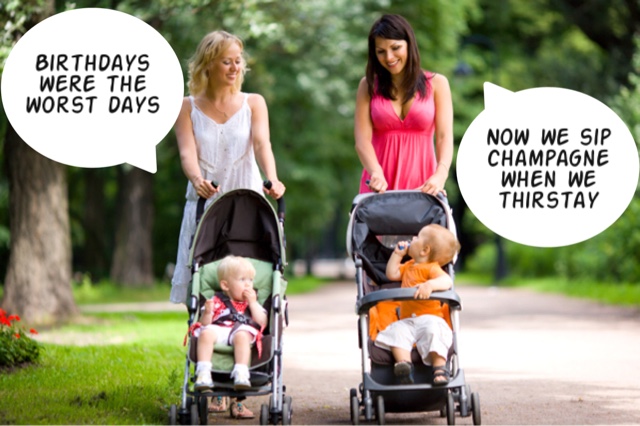 I make myself sound unsociable but I’m really not. I’m cheerful and well-mannered to anyone I meet, but I draw a line at touting for friendships. In any case, it’s all too late. These friendship groups were formed early on at NCT classes which I never went to because I didn’t want to be forced into a cringey friendship group that I’d look horrible for extricating myself from if they turned out not to be my cup of tea, and at early baby groups which I seldom went to because I had a slow and sometimes miserable start to motherhood. Thus, the door is shut in my face and I am not the sort of person to knock in the vain hope of an answer. I mean I could if I wanted; I’ve probably got a nice tunic somewhere I could wear. I’ve got avocados and flaxseed at home, we don’t always go to McDonald’s. We could take skiing lessons and get a mandarin tutor.

Or, I could just be me. After all, it’s me that makes my baby happy, and it’s him that makes me happy. And that’s the best friend a mum can have.